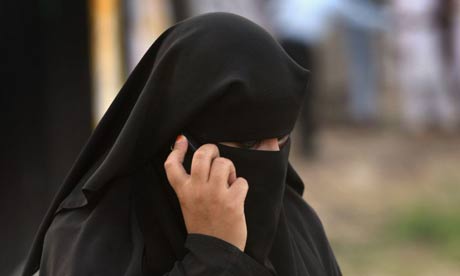 A woman wearing a burqa. France has denied citizenship to a Moroccan woman who wears a burqa on the grounds of ‘insufficient assimilation’. Photograph: John Moore/Getty Images

France has denied citizenship to a Moroccan woman who wears a burqa on the grounds that her “radical” practice of Islam is incompatible with basic French values such as equality of the sexes.

The case yesterday reopened the debate about Islam in France, and how the secular republic reconciles itself with the freedom of religion guaranteed by the French constitution.

The woman, known as Faiza M, is 32, married to a French national and lives east of Paris. She has lived in France since 2000, speaks good French and has three children born in France. Social services reports said she lived in “total submission” to her husband. Her application for French nationality was rejected in 2005 on the grounds of “insufficient assimilation” into France. She appealed, invoking the French constitutional right to religious freedom and saying that she had never sought to challenge the fundamental values of France. But last month the Council of State, France’s highest administrative body, upheld the ruling.

“She has adopted a radical practice of her religion, incompatible with essential values of the French community, particularly the principle of equality of the sexes,” it said.

“Is the burqa incompatible with French citizenship?” asked Le Monde, which broke the story. The paper said it was the first time the level of a person’s personal religious practice had been used to rule on their capacity be to assimilated into France.

The legal expert who reported to the Council of State said the woman’s interviews with social services revealed that “she lives almost as a recluse, isolated from French society”.

The report said: “She has no idea about the secular state or the right to vote. She lives in total submission to her male relatives. She seems to find this normal and the idea of challenging it has never crossed her mind.”

The woman had said she was not veiled when she lived in Morocco and had worn the burqa since arriving in France at the request of her husband. She said she wore it more from habit than conviction.

Daniele Lochak, a law professor not involved in the case, said it was bizarre to consider that excessive submission to men was a reason not to grant citizenship. “If you follow that to its logical conclusion, it means that women whose partners beat them are also not worthy of being French,” he told Le Monde.

France is home to nearly 5 million Muslims, roughly half of whom are French citizens. Criteria taken into account for granting French citizenship includes “assimilation”, which normally focuses on how well the candidate speaks French. In the past nationality was denied to Muslims who were known to have links with extremists or who had publicly advocated radicalism, but that was not the case of Faiza M.

The ruling comes weeks after a controversy prompted by a court annulment of the marriage of two Muslims because the husband said the wife was not a virgin as she had claimed to be.

France’s ban on headscarves and other religious symbols in state schools in 2004 sparked a heated debate over freedom and equality within the secular republic. The French government adheres to the theory that all French citizens are equal before the republic, and religion or ethnic background are matters for the private sphere. In practice, rights groups say, society is plagued by discrimination.

The president, Nicolas Sarkozy, has stressed the importance of “integration” into French life. Part of his heightened controls on immigrants is a new law to make foreigners who want to join their families sit an exam on French language and values before leaving their countries.

Tony Veitch’s statement in full, From the NZ Herald

This week there have been reports of an incident between my former partner and me two and a half years ago. I deeply regret what happened and have done so since it occurred.

On the night in question I agreed to let Kristin come over to my house. Following dinner we had a major disagreement and we argued for a long time. In the end my frustration took over. I broke, and lashed out in anger – something I will regret until the end of my days.

Some of what’s been said by the media is untrue, but again, no excuses.

It’s the thing I will most regret in my life. I have lived with that on my conscience ever since and I will always do so. I make no excuse for what I did, except to say at the time my relationship with Kristin had just ended. I was working seven days a week and two stressful jobs and was emotionally and physically exhausted. I was taking medication for the exhaustion. I was at the lowest ebb of my life and I needed help, but again, it was inexcusable. In the long period after the event took place we remained in contact with each other.he reason I have not spoken until now is that Kristin and I made an agreement about confidentiality because we did not want this to play out in the public.

That agreement included payment to Kristin for loss of income and distress I caused her. I had no wish to breach that confidentiality, but because of the growing controversy and the positions I hold and the standards of behaviour those positions demand, I feel it important to offer some words of explanation and I have no desire to put Kristin through any further distress.

Following the incident I undertook weekly counselling for a year, counselling which enabled me to form the relationship I now have with my wife, Zoe. Indeed, I told Zoe what had happened shortly after we started seeing each other. She has been completely supportive and I am grateful beyond words for that support and for her love.

Once again I know what I did was wrong and it will never happen again.

Women with long fingernails are complaining that iPhones are sexist, according to the Los Angeles Times. The iPhone’s virtual keyboard responds to the electrical charge emitted by fingertips, not fingernails. “Considering ergonomics and user studies indicating men and women use their fingers and nails differently, why does Apple persist in this misogyny?” says Erica Watson-Currie, 39, a consultant and lecturer. (Source NZ Herald).